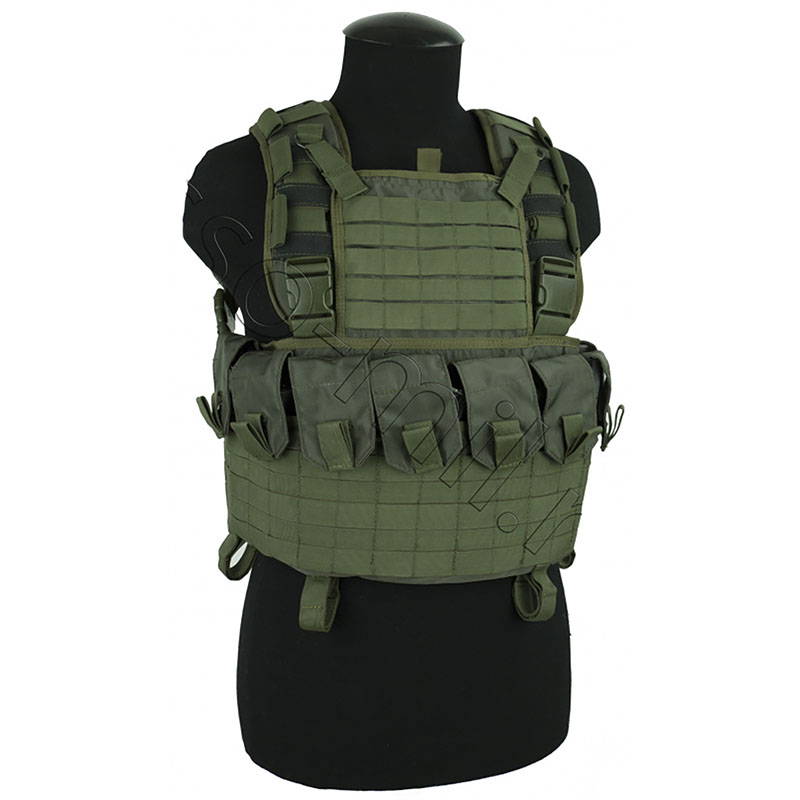 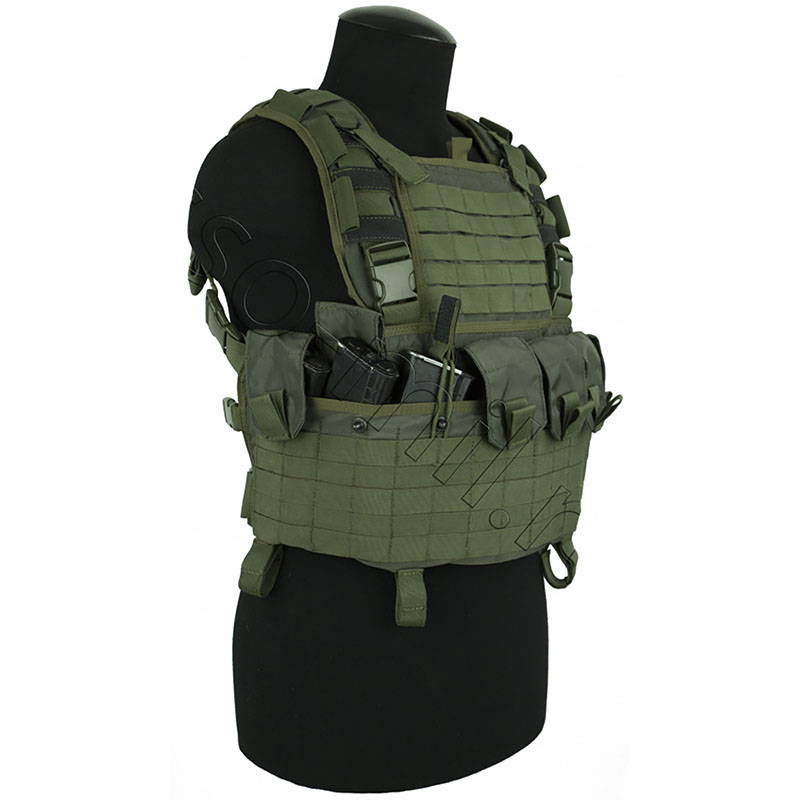 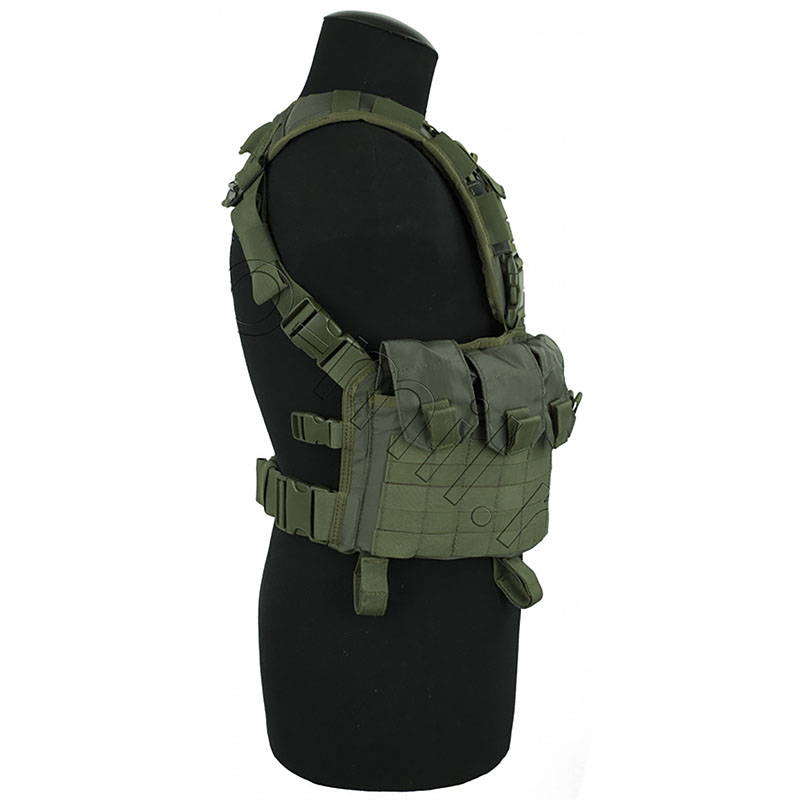 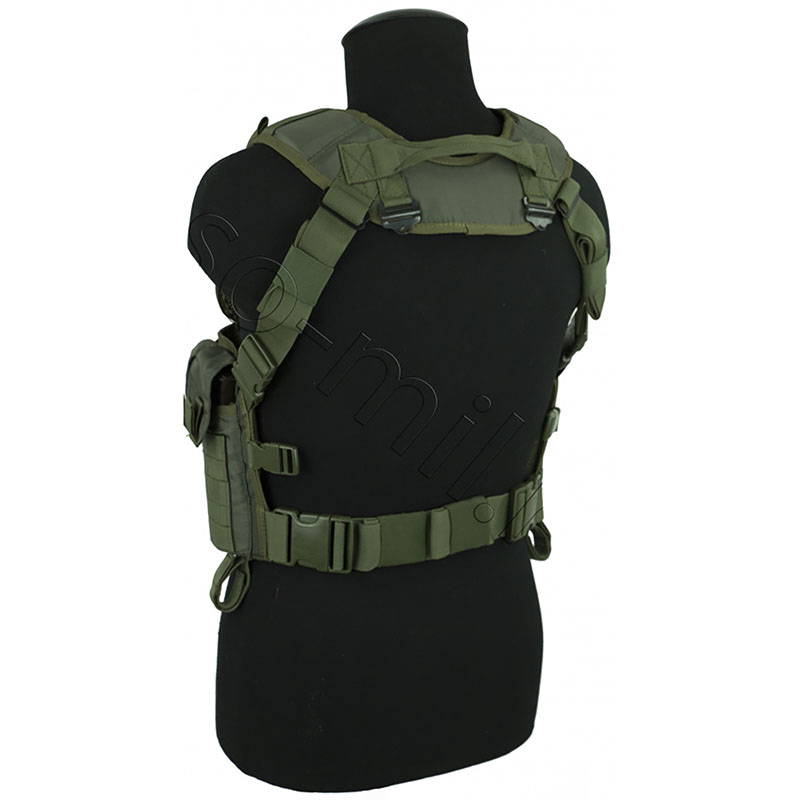 Lightweight bib for eight mags 7.62 / 5.45 AKM / AK - 74M.
The breastplate is designed for fighters of units operating in dense urban areas, in underground utilities, in dense undergrowth, located for a long time inside vehicles (armored personnel carriers / infantry fighting vehicles, armored cars), landing from helicopters on ropes. The bib is comfortable when worn over a bulletproof vest, with large-volume backpacks with developed belts.
Also, the bib can be used as a cover for an armor plate (GRANITE, SAPI).
Magazines fit in one row, pocketed by seven partitions into eight cells and closed with eight removable rectangular valves, fastened with brass turnstile buttons.
This button is reliable, it can only be unfastened in one direction (up), due to the high leg it is convenient to fasten it with gloves. Inside the cells, the valve is attached to a Velcro fastener on the back wall; if necessary, the valves are removed and replaced with elastic cords with flags from a belt tape 25 mm wide and 50 mm high that are worn on store covers.
Elastic cords are attached to the front wall of the pocket behind the upper horizontal belt fastening straps of the PALS (MOLLE) modules and threaded into eight pairs of holes with grommets on the back wall, after which they are tied with knots in the inner pocket. To attach the PALS (MOLLE) modules to the bib, three horizontal belt belts with sixteen cells with a width of 35 mm are sewn onto a pocket for stores. The bib is worn on H-shaped shoulder straps, with an evacuation loop on the bridge.
For the convenience of wearing a bib with body armor and backpacks, soft padding made of isolon 5 mm thick. For better ventilation, the straps are lined with mesh. The length of the belt straps of the straps and the belt allows you to customize the bib for military personnel size / height from 44/3 to 62/7. The shoulder straps are fastened to the bib by “fastexes” and can be replaced by straps with backs - pockets for hydraulic systems, armor panels - for this the back bib belt is removed from the adjustment frames of the “fastex” locks and replaced with removable back belts.
Webbing with mounts for PALS (MOLLE) modules and side elastic loops for cables and hoses. To fasten the vertical straps of a small removable dorsal panel on the shoulder straps, two buckles are sewn - “six-walled”. The armored panel is mounted on the bib using a vertical pocket and a folding chest inside panel, which is folded in the inner pocket of the bib and fastens with a button flap.
The armored panel is placed in a pocket made of mesh on the bib lining, attracted by elastic braid, and its top is fixed with a stitched cross - crosswise with elastic braid on the lining of the chest panel.
The panel is fastened to the rings on the shoulder straps with removable, adjustable length straps. The lining of the chest panel has an internal pocket in which removable elastic cords with flags for stores are stored.
This pocket can also be used as an organizer - the top of the pocket is fastened with Velcro and has two tabs, the outer wall is lined with straps for attaching PALS (MOLLE) modules.
To fasten the bib to the safety system or belt below, four loops are fastened with Velcro and buttons. Bib dimensions:
Height with chest plate installed - 400 mm;
Height without breastplate - 230 mm;
Length - 650 mm;
Width - 30 mm.
The weight of the bib from a fabric with a density of 500D is 1 kg 490 g. 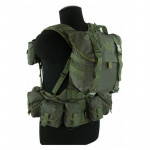 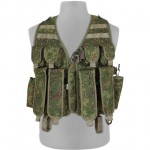 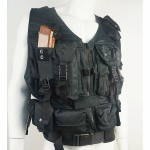 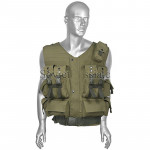